Images and discovery details of Supernovae SN2010lt in UGC 3378
(imaged on December 31, 2010 and discovered on January 2, 2011 and confirmed on IAU Electronic Telegram 2618)
Discovery made by Kathryn Aurora Gray (age 10!), Paul Gray and Dave Lane from Abbey Ridge Observatory

Read some of the many news stories about it from around the world!

Visit the supernova's Wikipedia page that someone created! There is also a dedicated page on 2010lt at David Bishop's Bright Supernovae site.

Kathryn Aurora Gray, Paul Gray, and I are pleased to report that we have discovered a supernova (mag ~17) in UGC 3378 (a magnitude 15 galaxy in the constellation of Camelopardalis), as reported on IAU Electronic Telegram 2618 (see below).

It was verified shortly after dark later that day by Illinois-based amateur astronomer Brian Tieman and Arizona-based Canadian amateur astronomer Jack Newton. It was then reported to the IAU's Central Bureau for Astronomical Telegrams.

This is the third discovery from the Abbey Ridge Observatory, my fourth, Paul's seventh and Kathryn's first! So far was we know, Kathryn's discovery at age 10 made her the youngest supernova discoverer at the time, but in October 2013 her younger brother Nathan beat her record by 33 days! 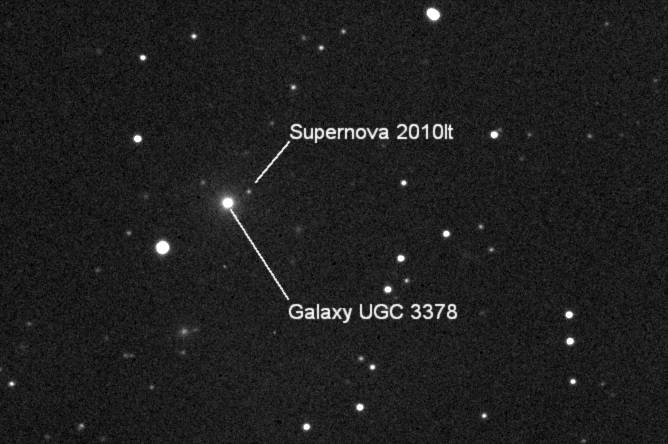 G. H. Marion and P. Challis, Harvard-Smithsonian Center for Astrophysics (CfA), on behalf of the CfA Supernova Group, report that a spectrum (range 340-740 nm) was obtained of 2010lt (cf. CBET 2618) on Jan. 3 UT by P. Berlind with the F. L. Whipple Observatory 1.5-m telescope (+ FAST). Cross-correlation with a library of supernova spectra using the "Supernova Identification" code (SNID; Blondin and Tonry 2007, Ap.J. 666, 1024) shows that the object is a sub-luminous (1991bg-like) type-Ia supernovae near maximum light.