Two new live cameras have been added. These show the outside of ARO and MRO from my office window and the inside of the dome. Both have the IR lighting disabled so won't see much at night.

ARO observer Filipp Romanov contributed positions of two new comets that lead to their confirmation. These comets are very faint - about magnitude 19 - so were only visible by stacking and shifting the images at the expected motion of the comet. Observation links are: C/2022 P3 (ZTF) and C/2022 Q2 (ATLAS)

Observations of HM Sge by ARO Observer Simone Bolzoni are used in this AAS Research Note. This note documents a sudden dimming of HM Sge, a symbiotic Mira-type variable star.

Fillipp presented this poster paper at the 2022 IAU General Assembly - a rare thing for an amateur astronomer! He summarizes many of the observations and discoveries he has made over the past years. Some of these have used the ARO and BGO. Congratulations!!!

This observation (see details below) was picked up by SpaceWeather.com!

Fast rotating near-Earth asteroid 2022 AB was first observed at GINOP-KHK, Piszkesteto (K88), by K. Sarneczky.
The asteroid passed 9.6 lunar distances from the Earth on January 20th, 2022, at 13:21 UT. Filipp Romanov observed 2022 AB remotely using the ARO as part of the observing campaign for 2022 AB. Unfiltered photos were taken over several nights in January 2022, with exposure times of 18 and 10 seconds for each image. For the first time (previously Filipp had only did phase plots of variable stars, including discovered by him),
I plotted the rotation phased light curve of an asteroid. I made photometric measurements (in MaxIm DL software) of the asteroid in comparison to V magnitudes (from the APASS DR9 catalog) of nearby stars from 590 images taken on 2022-01-11 (from 02:08:55 to 09:30:48 UT). Below is the phase plot created in VStar software for the best (which is searched using VStar) period = 0.002105 days = 181.87 seconds. 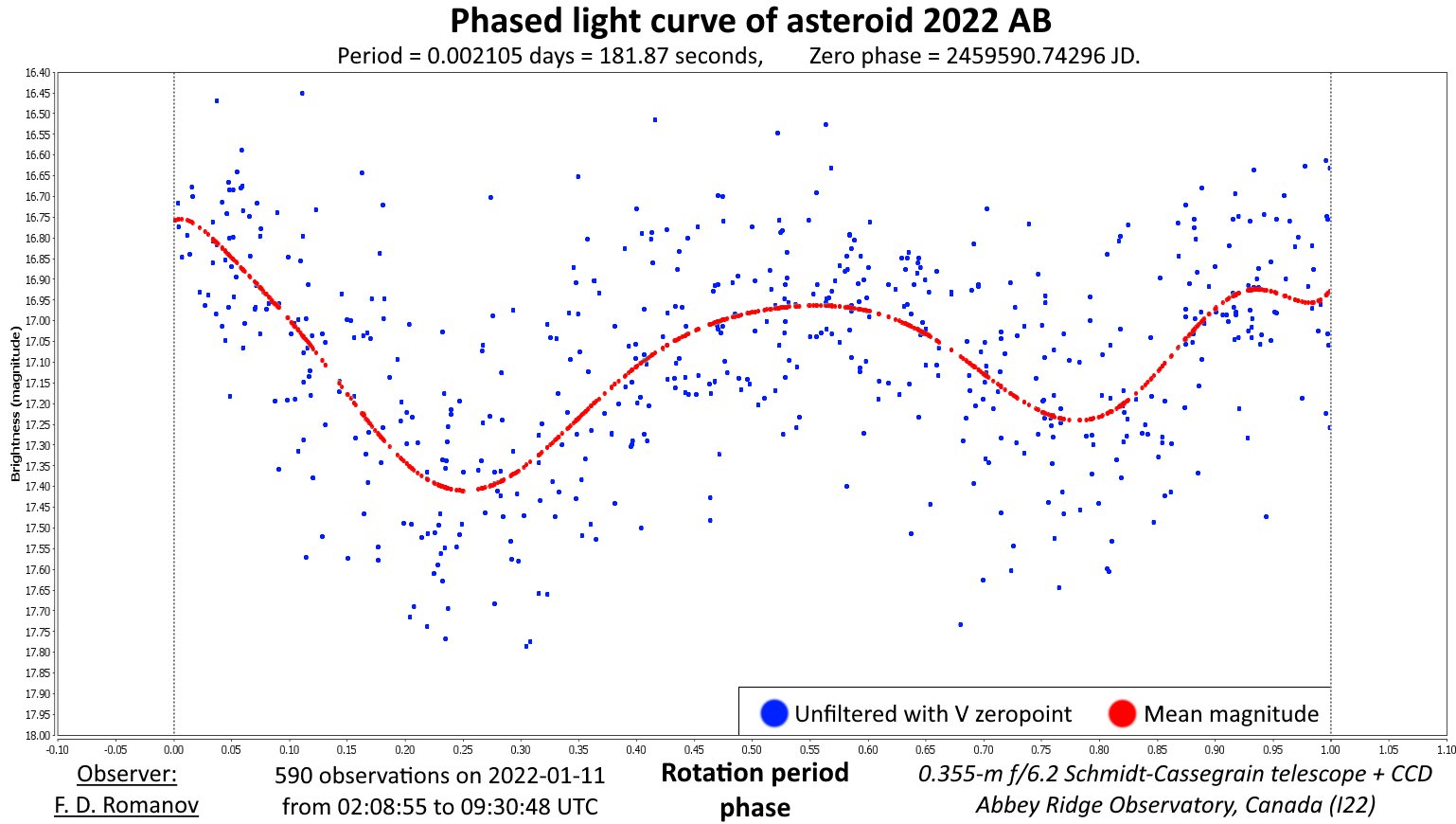